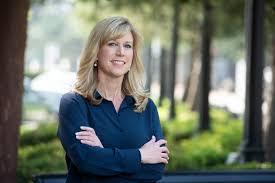 State Assemblywoman Christy Smith is an effective leader from her district with a proven record of passionately fighting for public safety and education.

Smith has dedicated her career to education, serving as an Analyst for the Department of Education and founding the Valencia Valley Technological Education Foundation before becoming the first Democrat to represent the 38th CA Assembly District in over four decades. In the Assembly she has championed expanding access to quality, affordable health care, lowering prescription drug costs, and expanding opportunities for working families.

A leader on public safety, Smith wrote the CA law to compensate victims of human trafficking so that they have a chance to rebuild their lives. As Chair of the State Assembly’s Joint Legislative Committee on Emergency Management, she co-authored a law that ensures first responders have mental healthcare covered in their workers’ compensation policy.

Smith also serves on the State Assembly’s Education Committee; the Jobs, Economic Development, and the Economy Committee; the Privacy and Consumer Protection Committee; as well as the Accountability and Administrative Review Committee. As a former school board member, Smith has been an outspoken advocate for CA schools, and has fought for more resources for local classrooms. In her first year in office, she enacted groundbreaking rules protecting high school students from sexual harassment, and ensured that high schools publicly post reporting procedures and harassment policies.

Christy’s assembly district represents 58% of California’s 25th Congressional District, which will be crucial in her upcoming election. Although Christy recently lost her special election against now-Rep. Mike Garcia (likely due to low turnout related to Covid), all signs point to her victory in their general election rematch. Christy will win if we do all in our power to ensure that she emerges victorious come November!