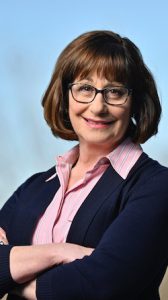 State Senator Jill Schupp’s life is rooted in the St. Louis area where she grew up. Jill’s desire to help her community and solve problems led her to the state legislature, where she has worked to eliminate surprise billing in emergency rooms, improve day care safety, and help curtail suicide through required training for mental health professionals. Jill’s goal is to find solutions to improve the lives of the people she has been elected to represent.

From growing up in University City working part-time while in high school at Parkway North, to being one of the first in her family to graduate college, Jill has been shaped by a family and community that valued hard work, a good education, and a belief that everyone should have an opportunity to succeed in life. After attending the University of Missouri, she became an elementary school teacher and helped to run an advertising agency and eventually won a seat on her local School Board.

Since then, Jill’s desire to help her community and solve problems put her on a path of public service. She went on to win a seat on her City Council, and then the Missouri legislature, where she currently serves as the only Jewish individual in the entire state assembly. Jill is now challenging Rep. Ann Wagner. MO-2 for this Western St. Louis suburban seat.

Once a GOP bastion, this district is visibly slipping away from the GOP’s grasp. Donald Trump took 52 percent of the vote here in 2016, down from Mitt Romney’s 57 percent in 2012. In 2018, Democratic attorney Cort VanOstran held Wagner to a surprisingly close 51 percent to 47 percent margin as Democratic Sen. Claire McCaskill carried the district en route to losing statewide. Jill has stated that her Jewish identity has been central in her fight for justice and equity. Let’s ensure that she takes this fight all the way to Washington, D.C. this November.