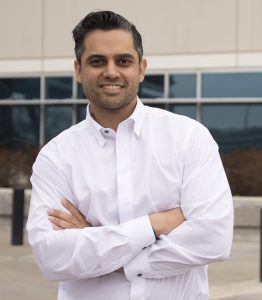 A Foreign Service Officer who represented America abroad under Presidents Bush and Obama, Sri Preston Kulkarni is ready to flip Texas’ open 22nd Congressional District. Born in Houston to an immigrant father and a mother whose roots date back to the Texas Revolution, Sri personally experienced the same challenges that so many communities face today: flooding, gun violence, a broken criminal justice system, and unequal access to education, which forced him to take a bus across town every day to attend a better public school.

Inspired by a calling to serve his country, Sri was commissioned as a United States Foreign Service Officer. Sri served the US overseas for more than 14 years, fighting to protect national security and reduce conflict around the globe. But after watching the impact of the 2016 election, including the horrific events in Charlottesville, he recognized that the greatest danger to our country was not a foreign power, but in fact closer was to home. Following this, Sri resigned from the Foreign Service and came home to serve.

In 2018, Sri came within 14,000 votes of flipping this district – closing a 30 point gap and surprising pundits, who put this race on the competitive map for the first time. His campaign was also the first to be run in 15 different languages, reflecting Sri’s understanding and commitment to the diversity of his district. Let’s do everything we can to make sure Sri crosses the finish line successfully this time around.