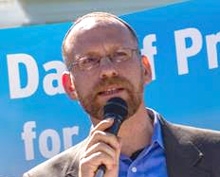 Rabbi Jason Kimelman-Block is the Washington Director of Bend the Arc: Jewish Action, where he works to bring the voices of progressive American Jews into the halls of power in Washington, D.C. He previously served as Bend the Arc’s Rabbi-in-Residence and directed the Selah Leadership Program. He is the co-editor and co-author of Just: Judaism. Action. Social Change and served as the Director of the PANIM Institute for Jewish Leadership and Values.

He received his rabbinic ordination from The Jewish Theological Seminary of America and his B.A. in Political Science from Grinnell College. Rabbi Kimelman-Block is also a founding member of a cohousing community in Maryland, where he lives with his wife and their four children.

As the Director of Bend the Arc Jewish Action PAC, Derek identifies federally elected officials and candidates who are in the best position to champion Bend the Arc: Jewish Action’s legislative agenda and maximizes the PAC’s resources to support those candidates.

Derek comes to Bend the Arc: Jewish Action with an extensive background in political strategy and legislative advocacy. He has created and executed candidate campaigns, PAC strategy, and led movements from the bottom up as a community organizer. For the past four years, he has been working as an independent campaign consultant. Prior to that, Derek served as the Deputy Director for Campaign for America’s Future. His research has been published by several national think tanks and his written work has been featured on numerous media outlets.

Derek is a graduate of Beloit College and the School of Professional & Extended Studies at American University. Originally from Cincinnati, Ohio, Derek has lived abroad in Singapore and Denmark. He has served as a LGBTQ Advisory Board Member for the DNC and a Board Member of the Jewish Community Relations Council of Kentucky.

Bend the Arc: Jewish Action’s Board, including PAC Committee members is as follows: